Global manufacturing firm Ingevity inherited outdated systems from it’s former parent company. As they neared the end of a five-year agreement for their on-premises data center, the team began planning a complex migration to Microsoft Azure. Working with Microsoft Preferred Partner Protera for consolidation and management, Ingevity moved 450 SAP and non-SAP servers and 74 TB of data to the cloud with an accelerated time frame with no interruption for internal users.

We inherited a highly customized, 20+ year old version of SAP and were struggling to introduce new capabilities to the business. We saw S/4HANA as an opportunity to transform the business, to go back to standard best practices.

When the 1,700 employees at Ingevity signed on to their systems around the world on Monday morning, they didn’t notice anything different from the previous Friday. For these internal users, the mission-critical cutover from the old on-premises environment to Microsoft Azure was an utter nonevent. For the IT team at Ingevity, together with the migration experts at Protera, it was the successful culmination of meticulous planning and testing.

Ingevity is a speciality chemicals company and Tier 2 automotive manufacturer headquartered in Charleston, South Carolina, with a business model build on sustainability. It takes byproducts from paper manufacturing and chemically reengineers them into performance-enhancing products. It also makes activated carbon from hardwood sawdust, which is used for gasoline vapor emission control in automobiles.

Just as environmentally sustainability is an important core value for Ingevity, the company also prioritizes the sustainability in it’s business. The IT team recognized that the on-premises model passed down from their former parent company was not the right model for their future. They wanted to go cloud-first and cloud-smart with a fully consolidated and managed datacenter. 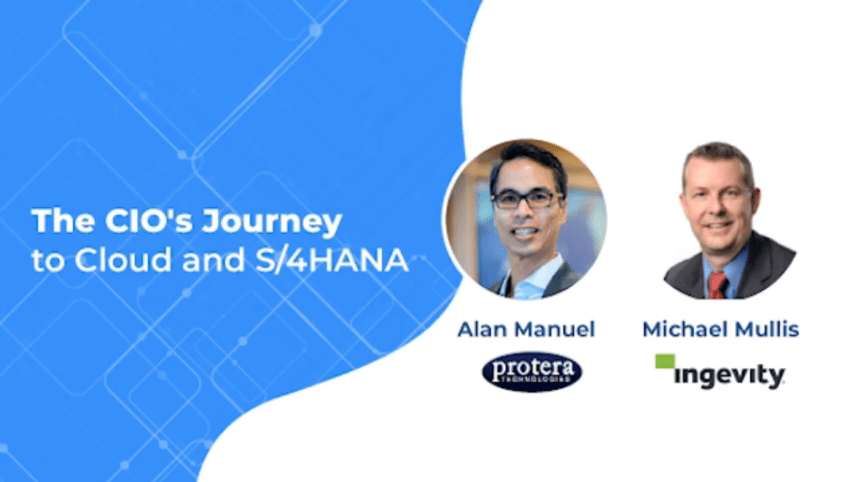 We inherited a highly customized, 20+ year old version of SAP and were struggling to introduce new capabilities to the business. We saw S/4HANA as an opportunity to transform the business, to go back to standard best practices. “From a cost perspective, we were heavily into a capital expenditure [CAPEX] model,” said Michael Mullins, CIO at Ingevity. “We bought the infrastructure that was managed in a co-located data center, and we were one of many customers being serviced by our former provider. But that’s not core business for Ingevity.” Transitioning to infrastructure as a service (IaaS) would give Ingevity more flexibility, so it wouldn’t have to size and purchase every piece of hardware whenever the company wanted to do something new. Ingevity was looking ahead to it’s SAP business transformation, and getting onto a scaleable, highly secure, and robust platform was an important part of that journey.

Microsoft introduced Ingevity to Protera, a member of the Microsoft Partner Network and an SAP-centric global services provider, which would assist with the migration and provide managed services going forward. The Protera team, consisting of a cloud architect, database administrator, and IaaS experts, handled project coordination to ensure a smooth migration. “We’ve had nothing but positive experience with Protera,” said Mullis, “and we have nothing but great things to say about them.”

Mullis and his team had clear key performance indicators (KPI’s) for this critical workload migration, which they communicated to Protera. Most important was the timeline. The entire process needed to be complete, from assessment and discovery to go-live, within six months. Also, there could be no disruption to the business.

This operation was not a straightforward lift-and-shift migration. As Mullis explained, “one of the basic tenets I brought to the table with Protera was ‘simplify, standardize and optimize,'” The IT landscape passed down from Ingevity’s parent company was not designed and implemented for a chemical organization, and it included obsolete and redundant systems that needed to be modernized and consolidated.

Protera brought something to the table, too: a repeatable, scalable methodology and an analytics and automation platform called Protera Arion that helps move large numbers of systems into the cloud quickly and securely. Using Protera Arion, Protera can provide rapid, guaranteed migrations and give customers unique operating insights for SAP on Microsoft Azure.

The planning stage revealed just how much of a black box existed around the previous datacenter. “We found out that our prior provider didn’t know certain systems we had, or how they worked, or even if they existed,” explained Ralph Wasner, Director of IT Infrastructure and Strategy at Ingevity. “Protera would say to me, ‘Ralph, don’t you know anything about what you’ve got in place?’ and the answer was no, we didn’t, because we had outsourced it. So Protera laid out all the things we needed to know and helped us get over the bumps to build a good plan.”

Together, Ingevity and Protera undertook a painstaking process, going through long lists of servers and applications to make sure they understood what everything was. “Ingevity has a very complex and integration IT landscape with multiple instances,” said Manos Papakonstantinou, Director of Infrastructure and Cloud Services at Protera.

During the architecting exercise that followed, great gains were made in optimization. “In the past, Ingevity might have five or seven application servers for it’s SAP production system. That got consolidated down to three servers,” explained Jatin Oza, Director of Applications Management Services Group at Protera. In the end, the extent of the physical copy-and-paste migration was brought down from days to hours, and the. total number of servers was reduced from 600 to 450.

The proposed architecture paid close attention to security requirements, following the fundamental principals of Azure. “Ingevity wanted to base their security policies on an east-west routing,” explained Papakonstantinou, “so we split from VNet [Azure Virtual Network] into multiple subnets, and we assigned the servers into the specific subnets based on rules. Then the firewalls came in, and we followed security best practices around what is allowed and prohibited.”

Interactive testing was a crucial factor in achieving a migration with zero-recovery time (RTO), meaning there was no business interruption for Ingevity. “Protera literally rehearsed the migration of all the SAP and ‘SAP-friends’ applications as a phase one, running it in an isolated network on Azure,” said Oza. “Then an elite group from Ingevity stress-tested these applications, simulating the user experience.” After all that preparation, the actual cutover from on-premises to cloud went without a hitch, just the way Mullis wanted. “My team knows that I don’t like surprises,” he said. “We plan accordingly to make sure everything goes smoothly.” Ultimately, Ingevity moved 74 TB of data, 180 systems, and 462 network devices serving manufacturing sites and sales offices in 23 countries, without the users even noticing.

The benefits of a resilient cloud infrastructure

This cloud migration makes Ingevity more resilient on several fronts. It has strengthened financials by moving from the CAPEX model to the IaaS model. In fact, the company gained 50 percent or more of the cost optimization through the design solutions that eliminated the need for 150 out of 600 servers.

The company also gained agility in operations. “We talked about spinning up a file server for something we’re doing with finance,” said Wasner. “In a datacenter, that would be a three-to four-week project. In the Azure cloud, it takes maybe two days to stand up.”

In oder to enable secure, remove desktop access, Ingevity implemented Windows Virtual Desktop (WVD), which provides employees and contractors with a virtualized experience that is fully optimized for Windows 10 and Microsoft 365. WVD—a desktop and app virtualization service that runs on the cloud—offers Ingevity a flexible model for it’s hosted environment. In addition to flexibility and cost savings, WVD facilitates integration of remote work teams.

The WVD environment also gives Ingevity the ability to control access for noncompany employees, enabling a more secure, collaborative, and scaleable framework. Now, Ingevity’s IT team can quickly provision virtual desktops, as needed, directly from the Azure portal. They can create a full desktop virtualization environment in Azure without having to run any additional gateway servers. “The ability to add environments for outside contractors and scale them back down at a moment’s notice is phenomenal,” said Wasner. “You can’t do that in a hardware environment.”

User access can be defined by criteria such as user location or role. WVD includes built-in delegated access to assign roles and to collect diagnostics to understand various configuration or user errors. Once assigned, users can launch any WVD client to connect to their published Windows desktops and applications.

The ability to create a full desktop virtualization environment without having to run any additional gateway servers is a powerful tool for Ingevity. The company also can publish as many host pools as it needs to accommodate diverse workloads, and can migrate it’s own images for production workloads.

Finally, Ingevity increased its understanding of and transparency around the company’s infrastructure. Wasner said, “We know how all of our platforms come together, how they’re sized, what we’re using, what the consumables are, and our growth models,” With Protera providing managed services, Wasner receives an explanatory email looking for permission to scale up a server when it starts to grow it’s memory or processors. Ingevity now has much more visibility into it’s optimized infrastructure and the flexibility to spin up new systems in days, not weeks. With this increased resilience, the team is well-positioned for the next phase of their digital transformation, implementing SAP S/4HANA.

The SAP S/4HANA transformation, called Project Mosaic, moves the company away from it’s current 20-year enterprise resource planning (ERP) system. “We’ll be discarding the old ERP system within 12 months and launching an SAP solution that’s made for Ingevity using best practices for chemicals and automotive, hosted and run in a public hyperscale environment,” said Mullis. With support from Microsoft and Protera, Ingevity is leading the way for digital transformation in it’s industry.