For commercial solar developer Greenskies, keeping the cost of solar energy low is key to its vision of widespread clean energy adoption.

We’ve been able to leverage applications, processes, and technology to continue growing, all while keeping our overhead costs down.

Headquartered in New Haven Connecticut, Greenskies along with its sister company, Clean Focus, develop, finance, consutrct, own and operation clean, renewable-energy projects in the United States. From beginning to end, origination through construction and then lifetime operation, customers work with a single delivery team. Greenskies offers integrated solar and battery-storage solutions to C&I municipal, and utility customers, while Clean Focus provides the capital and owns the systems.

As a fully integrated commercial solar developer, Greenskies Clean Energy brings solar to companies and municipalities across the United States at little to no upfront cost. Greenskies’ vertically integrated business model makes clean energy accessible to entities ranging from small towns to Fortune 40 companies, all with the goal of reducing greenhouse gases and creating a cleaner, greener world.

Because keeping the cost of solar low is critical to its adoption, Greenskies is committed to increasing efficiencies and reducing overhead costs through process and technology improvements. In 2014, the company chose to replace its legacy ERP software with SAP with the help of AWS Select Consulting Partner Protera Technologies. Beyond cost savings, Greenskies sought to modernize its IT landscape, differentiate itself in a cyclical and competitive industry, and drive continued growth.

We’re always trying to stay ahead of the curve on our technical solutioning, driving efficiencies in our business,.” said Eric Zenner, Vice President of Process and Technologies at Greenskies. “Protera has been a trusted partner willing to jump into new projects and spend the extra time to get it right. 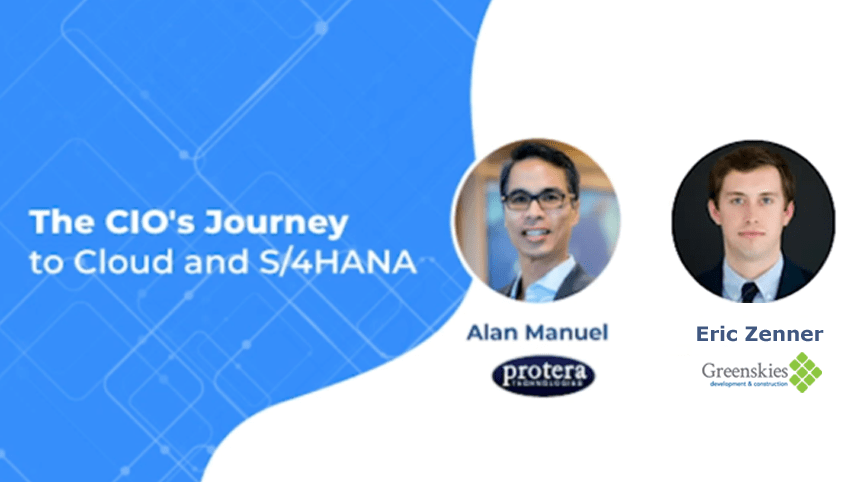 The only constant in solar is change. We need to have flexible systems and processes that allow us to take advantage of new opportunities, and we have that with Protera and AWS. While moving to SAP provided business benefits the legacy system could not, Greenskies soon realized that migrating to the cloud was key to reducing costs, improving reliability, and increasing scalability and flexibility over the long term. Protera’s cloud modernization platform, Protera Arion, migrating the company’s SAP workloads to SAP S/4HANA on AWS using built-in automations.

S/4HANA is only one part of Greenskies’ end-to-end software management system for solar projects. The company also runs a custom data warehouse and application set built in-house to address the unique project management requirements of the commercial solar industry. The custom system is fully integrated with S/4HANA, and a reporting suite that communicates with both systems sits on top, all run on AWS and supported by Protera’s SAP managed services solutions.
While Greenskies expected to reduce costs and improve reliability by moving to AWS, it also discovered the benefits of a more scalable and flexible system. For example, the company had originally deployed its reporting solution in a data center. After moving to the cloud, Greenskies realized it was not using all the resources dedicated to it. “Because of the scalability and flexibility of the cloud, we were able to easily take down one tenant we weren’t using,” said Zenner. “That alone reduced our cloud spend by 15 percent.”

Sharing a tale of two upgrades

Zenner also compared two SAP upgrades Greenskies completed, one before moving to AWS and one after, highlighting the business benefits of cloud migration. “When we were in a data center, an upgrade of our standalone HANA environment took 10-weeks. It required on-site communication and coordination because we needed an on-site resource to upgrade the physical appliance, so the 10-week timeline turned into 12 to 14 weeks, significantly delaying everything we wanted to do.”
He continued, “Two years later, we performed a similar but slightly more challenging upgrade. Since we were on AWS, and with Protera’s support, we could shorten the upgrade timeline to only four weeks and cut my team’s involvement by 60 percent. All together, we saved 80 percent over the cost of the previous upgrade.”

Leveraging AWS cloud technology and Protera’s SAP managed services, Greenskies has addressed internal and external projects that add significant business value. Internally, the company has more than 30 tax reporting entities, that individually record sales, revenue, and other financial transactions.
Historically, the company had to produce a consolidated financial statement for these entities annually, a process that took a considerable amount of time and effort. However, after a new parent company acquired Greenskies the reporting requirement changed from once a year to once a quarter. “We weren’t sure how we’d pull that off, but we found that since we were already on S/4HANA, we could upgrade quickly to take advantage of S/4HANA’s group reporting solution,” said Zenner.
Protera worked to spin up test instances of the upgrade without disrupting the company’s day-to-day business operations and had the upgrade fully tested and ready to use within three weeks. That gave Greenskies the time it needed to build and test the group consolidation reporting tool and meet the quarterly reporting deadline.
In the field, Greenskies uses the integrated data from its various systems to cost- effectively maintain its solar assets throughout their lifecycle. Because maintenance personnel are a limited resource, the company must decide where to deploy them and when. “We aggregate system generation data to understand how much energy a system is producing and device data to see which devices are producing well and which aren’t,” explained Zenner. “When we combine that with financial data from S/4HANA and project parameters from our custom project management system, our algorithm tells us which solar projects our team needs to service first. This saves us more money and ultimately generates more renewable energy.”

Since moving to the cloud, Greenskies has grown its operating portfolio by 600 percent while only doubling its workforce. “We’ve been able to leverage applications, processes, and technology to continue growing, all while keeping our overhead costs down,” said Zenner.

He continued, “While growth is a big part of it, so is survival. The only constant in solar is change. We need to have flexible systems and processes that allow us to take advantage of new opportunities, and we have that with Protera and AWS.”

“Greenskies is a perfect example of how a business can be enabled by technology,” concluded Binoy James, VP of Operations at Protera. “With a small team, they’ve been able to leverage the benefits cloud has to offer to solve business problems and drive their vision.”